Imagine you are covering a football game on a crisp fall evening. It is near the end of the season and your team is battling their rival, still jockeying for a place in post-season. The score is extremely close; your team is down by 3 points but in possession of the ball and inside 25 yards of the end zone. The excitement rushes over the crowd, the team and yourself as a senior wide receiver catches the perfect pass and breaks away for a touchdown. Just as he goes to score, he feels a pop and crashes to the ground holding his knee. You jog out to him and see the fear on his face. We all know what that athlete is thinking about his career, and we surely suspect that he has sprained his ACL. 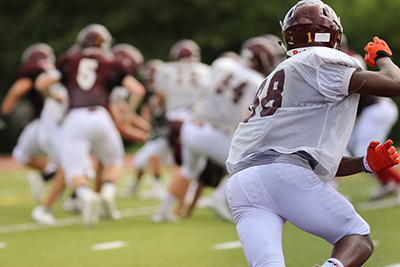 With an annual occurrence in the US between 120,000 and 200,000 ACL injuries1-2 and extended recovery times ranging from 6 to 9 months for return to sport2, it becomes apparent that ACL injury is a major concern for athletes. Recently, a study has suggested the use of neurocognitive testing to identify those athletes who are predisposed to an ACL injury.3 This could allow Athletic Trainers (ATs), to implement a targeted intervention through injury prevention programs. Luckily, in the NATA’s position statement on sports concussion, our governing body suggests that we conduct baseline neurocognitive testing annually on all athletes.4

The neurocognitive test used in this study was the Concussion Resolution Index, or CRI. While it is not the test most commonly implemented, it does have comparable sensitivity to the ImPACT neurocognitive test.5-6 The article suggested athletes could be identified as either high or low performers based on their performance in various neurocognitive testable domains, such as visual attention, processing speed, reaction time and dual-tasking.3 The article further postulated that a patient would qualify as a low performer if they met the following criteria: scoring below the 40th percentile in 1 subtest with 2 scores not exceeding the 70th percentile or at least 2 scores below the 30th percentile.3

CRI testing is not as common as ImPACT testing, which was recently recognized as the first computer-based neurocognitive test to receive FDA approval.7 If an athletic training facility was not using CRI, it would be worth examining comparable composite score domains between CRI and ImPACT for implementation. Of the 5 composite domains in the ImPACT test, the most comparable to those of the CRI would appear to be visual motor speed composite, reaction time composite and impulse control composite. We could use the same aforementioned percentile based scoring to categorize ImPACT tested athletes as low performers and identify them for inclusion with targeted ACL injury prevention programs.

One of the biggest concerns surrounding injury prevention programs is the time associated with their implementation, most programs can require anywhere from 15 to 90 minutes. This can also lead to issues with obtaining coach and athlete buy-in, which is vital to successful implementation.8

To acknowledge the challenges associated to this, time will always be the limiting factor for ATs. Implementation of this would require the AT to review an entire team’s neurocognitive tests and identify those qualifying as low performers. Then, the AT would need to develop and implement the targeted intervention. Interventions could be built in to training sessions or coordinated with the strength coach. Overall, it will require buy-in at multiple levels.

I believe neurocognitive testing offers promising advancements in injury prevention programs and could potentially increase effectiveness of interventions. As ATs, we play a unique role in prevention of injury, and we should implement any strategy that offers the best chance for the athletes to stay out of our athletic training facility and in the game.

Jeremy Howard is the State Health Promotion Officer for Florida Army National Guard under the Resilience, Risk Reduction, and Suicide Prevention Program. Howard graduated with a Bachelor of Science in Athletic Training from Florida Gulf Coast University (#DunkCity) and from the University of Saint Augustine for Health Sciences’ Master of Health Science in Athletic Training programs. He is currently pursuing an Educational Doctorate in Health Sciences at the same institution. In 2002, Howard enlisted in the Florida Army National Guard and is still currently serving; he is also a veteran of Operation Enduring Freedom-Afghanistan. His professional interests include Concussion/TBI, Injury Prevention Programs and Manual Therapy.