Basketball is a sport that requires several complex movement patterns, both within the individual and the team. Before an exercise specialist can create a training and nutrition program for any sport, it is important to first fully understand the game as a whole. This includes, but is not limited to, the specific movement patterns required to optimize performance as well as how to decrease overall time to fatigue in-game and during off-court training. Coupling movement patterns with a deliberate hydration plan and nutrition plan can optimize performance, while ensuring the athlete’s body can handle the strenuous mental and physical demands of the sport itself.

Basketball requires a combination of movements that include strength, endurance, power, agility, quickness and proprioception. While a single game lasts between 32 and 48 minutes, depending on the level, the actual exercise time may only be a fraction of that time. A single player will undergo 1 high intensity run every 21 seconds and spends nearly 60 percent of their playing time undergoing low intensity activity .2

In order for each player to maximize their performance on the court, they must ensure they have properly fueled the energy systems needed. The training needs of the sport will also need to be taken into consideration: the average basketball player trains between 2-3 hours per day, 4-6 days per week.2 Additionally, it is estimated that the average basketball player runs between 1 and 3 miles per game. These values have only been confirmed at the professional level with state-of-the-art tracking technology. Currently, the record belongs to Jimmy Butler, who ran an average of 2.74 miles per game during the 2015-2016 NBA season.

Nonetheless, a basketball player’s diet must reflect that of the short-term, high intensity movements coupled with long-term low intensity energy demands. The table below illustrates the nutritional requirements for basketball players at the high school and post-secondary levels:

During the practice or competition, it is recommended the athlete drink water or colored sports drinks that are kept at a cool temperature. This will prevent dehydration and exercise-induced hypoglycemia. Basketball players should be taking breaks and consuming either water or a sports drink roughly every 15-20 minutes during play.1 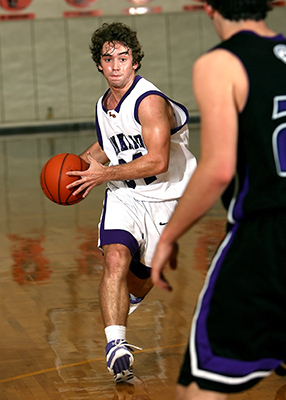 Furthermore, as expected, the lower extremity was the most common region of the body to have sustained injury amongst basketball players. Ankle sprains during landing accounted for nearly 45 percent of all lower extremity injuries. In females, knee injuries that occur during a cutting or rotational movement account for nearly 30 percent of all injuries amongst high school and collegiate basketball players.3

As mentioned above, given the knowledge we have about the specific injuries that occur within the sport, we can begin to predict future injury occurrences. Bird and Marwick explain it as “injury prevention through prediction; an approach that is used to assess fundamental movement qualities in order to identify and predict overall injury risk.”3

Recent research suggests that movement screens are moving away from the traditional isolated muscle strength assessment tests. They are moving towards an integrated approach that evaluates fundamental movements related to the assessment of “an athlete’s movement competency, or the fundamental mechanics required over a period of time within a specific sport.”3 In simple terms, the assessment should focus on the fundamentals, which can then be continuously trained to ensure a safe, yet effective improvement in overall sport performance.

Below are a few of the functional assessment tools utilized by this study and their practical applications. Each test is scored on a scale of 1-3 (1 being can not complete without major flaws; 2 being can complete but with some flaws and 3 can execute with technical proficiency).3

b. Practical Application: These assessments will allow the practitioner to visualize any neuromuscular control deficits, muscular strength deficits or imbalances, knee position and trunk position/compensation.3

b. Practical Application: Considered a reliable screening tool in the identification and prediction of non-contact ACL injuries through the evaluation of landing mechanics.3

a. Allows for evaluation of the ability of the hip, knee and ankle to absorb force during take-off and landing, specifically targeting the stretch-shortening cycle.

b. Practical Application: The ability to identify and predict lower extremity dysfunction such as high risk landing patterns, knee loading patterns and neuromuscular control within the hip, ankle and knee in conjunction with the trunk.

a. Correct landing technique can be visualized through ankle dorsiflexion range of motion

b. Practical application: can be a predictor of ankle injuries caused by poor force absorption within the ankle due to a lack of ROM.3

a. Used to assess static and dynamic balance and neuromuscular control that involves single leg balance in 8 different directions. This will allow for the assessment of “ankle dorsiflexion, knee flexion, overall knee and hip range of motion, and proprioception.”3 Considered a reliable and predictive measure of lower extremity injuries within high school basketball players.4

Furthermore, a 2011 study by Mah, et al. out of the Stanford Sleep Disorder Clinic, investigated the effects of sleep extension on specific measures of athletic performance as well as the effect of sleep on reaction time, mood and daytime sleepiness in collegiate basketball players. It was noted an athlete who receives 79.7 additional minutes of sleep (~1.2 hours) per night, can see substantial improvements in performance in strenuous physical requirements, cardiorespiratory functioning and psychomotor tasks that include memory, learning ability and reaction time.5

Sleep extension will be predominantly critical within the collegiate and professional athletic population. This is due to the frequent travel across several time zones and into several different locations within the United States in a relatively short period of time. It was noted in this same study that collegiate basketball players travel on average of 2-3 times per month, with trip duration lasting anywhere from 3-5 days.5 This study reinforces the notion that at any level and within any sport, athletes require additional sleep in order to ensure optimal performance.

Through the use of a predictive model, the practical application of nutritional requirements, injury prevention and sleep extension can ensure optimal performance within the sport of basketball at any age level. Often times these aspects of athletic competition go unnoticed and only come to the forefront following an injury, burnout, nutrient deficiencies or an incident that is secondary to 1 of these occurrences. While there are specialists geared towards nutrition, sleep and injury prevention at the professional and collegiate levels, it will be important for high school athletic coaches and staff to understand the correlation between proper nutrition, proper sleep, injury prevention and overall performance and success within the sport in general.